Joys and worries of fatherhood

When I was first handed my son, I was surprised by how dark his eyes were. By what a distinct nose he had. He wasn’t as loud as I thought he would be. I don’t necessarily remember my feelings — just that when he finally came out, I thought “Oh! There he is!”

His birth in March 2014 brought with it so much to do, and so much I didn’t know how to do. I didn’t know what was normal and what wasn’t. I didn’t know how much space to give my wife physically and emotionally. I felt like the best thing I could do was to just be the worker — to make sure there was hot food and a clean house. That’s what I threw myself into.

Before he was born, I used to worry whether he’d be too small or too short because those were things I did not like about myself. Now that he’s here, I don’t care how short or tall or big or small he is. Our society has such a limited conception of physical beauty. One day it might tell him that he’s not beautiful. But he is.

It’s very easy to love him. Sometimes he’ll slap food away and cause a mess. But I love that he does that because he’s emphatically saying “No, I don’t want this.”  I love that we can’t force him to do anything, no matter how hard we try. Because he’s being himself. As I watch him, my heart breaks to think one day the world will tell him the way he is is not perfect. That he needs to change and not be himself. I worry he won’t listen when I tell him that he’s perfect just the way he is.

He never sits still. He always has to be doing something fun. I love following him around the house as he moves from toy to toy. I love when he’s in a good mood and he pushes boundaries. I love watching him figure out puzzles and games and make connections. He is stubborn and tenacious like his mom (and maybe me).

He knows he shouldn’t put rocks and dirt in his mouth. He rarely does it unless I’m watching. When I am, a sly smile crosses his face as he brings a stick or rock to his mouth and waits for me to take it away.

I got a lot of love and support when our son was born. But I also received some bad advice about what kind of father to be. Some worried I spent too much time cooking and cleaning, that these were not fatherly things to do and would not be a  good example to set for my son. I was urged to focus on my career instead.

The thing is, I want my son to see me cooking and cleaning. I want him to know there is no shame in any hard work. That to be a man is to work hard in every facet of your life.

For me, fatherhood is about love and respect. I try to think of my son not as a child, but as a growing individual who will make his own decisions one day — decisions that I may disagree with but will nevertheless respect. I try to remind myself of this when he rebelliously spills food all over the carpet or when he screams when I pry my cell phone out of his hands. 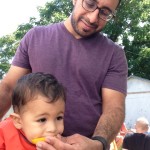 Ali Faruk works in policy and communications at the Virginia Department for Aging and Rehabilitative Services by day and as a father 24/7, because that’s not a role you can ever turn off. He enjoys chasing his son away from trash cans and potted plants.